A pumpkin pecan cheesecake just screams Fall dessert to me. Pumpkin spice meets pecan pie – is this not the best holiday dessert idea?

This soft no-bake cheesecake has a creamy, almost mousse-like, texture. The warming pumpkin spice goes so well with the crumbly ginger base and tangy cream cheese. The caramel pecan topping adds a delicious sweetness with perfectly crunchy nuts. It’s the ultimate Fall dessert!

The best part is that it’s a no-bake cheesecake so you can make it ahead of time, leaving it to set overnight. A great make-ahead dessert for your next family meal, whether it's Thanksgiving dinner or not!

It also contains pumpkin puree, so it’s basically a vegetable. Cheesecake counts as one of your five a day, right?

I’m a huge cheesecake fan, but sometimes I just can’t be bothered with the faff of baking one. The water bath alone is enough to make me sit back down on the couch instead. It’s one of the reasons why I love a no-bake cheesecake.

Ever since I first spotted canned pumpkin down the seasonal aisle, I’ve wanted to make so many pumpkin recipes, but a creamy pumpkin cheesecake topped my list. And of course, adding a pecan pie filling on top would only add to the Fall joy!

The cheesecake factory also has a pumpkin pecan cheesecake and it's one of their most popular this time of year! It’s only available for a limited time, so why not make one for yourself whenever you fancy.

This pumpkin pecan cheesecake recipe calls for the following ingredients:

For the cheesecake base, I love using ginger biscuits, but you can instead swap this for another cookie such as digestive biscuits or graham crackers if you’re not a fan of ginger.

You can use either pumpkin spice mix or mixed spice for the cheesecake filling. If you don’t have these spice mixes available, you can make your own by mixing the following ingredients:

I like to add ¼ teaspoon ground cinnamon to my pecan praline topping, but you can leave it out or swap it for more mixed spice / pumpkin pie spice.

You can use either whole (i.e. halves) or chopped unsalted pecans for this recipe. I usually buy mine whole and raw, then chop them and toast them myself.

You can swap the 9-inch springform pan for either an 8-inch or 10-inch tin instead. Note this will thicken or thin your layers, but it still comes out great!

If you don’t have a springform tin, you can use a loose bottom cake tin. Alternatively, you can use a regular cake tin and line it with greaseproof paper fully so there is an overhang at least on two sides so you can lift the cheesecake out gripping these pieces.

It's easiest to crush your ginger cookies using a food processor or blender. If you don't have one, add your cookies to a plastic food bag and bash it with a rolling pin until you get fine crumbs.

Step 1 - Place the ginger cookies into a food processor or blender and whizz until you get fine crumbs.

Step 2 - In a medium heatproof bowl, melt the butter in a microwave. Stir the crushed biscuits into the melted butter until combined.

Steps 3 - 4 - Press the biscuit mix into a lined tin (see tips), using the back of a spoon or measuring cup to help firmly press down. Put this in the freezer while making the cheesecake filling.

Optional steps A - B - If you only have soft spreadable cream cheese (e.g. in the UK), you can squeeze the liquid from 500g cream cheese (instead of using 400g) using a muslin cloth for a firmer cheesecake. This step is optional but can give your cheesecake a nicer texture.

Step 1 - In a large bowl, beat the cream cheese until smooth and fluffy, then sieve in the icing sugar.

Steps 3 - 4 - Whip the cream for several minutes, using an electric mixer in a medium bowl or stand mixer, until it forms stiff peaks.

Steps 5 - 6 - Gently fold the whipped cream into the cream cheese mix until smooth, being careful not to overmix.

Steps 7 - 8 - Spread the filling evenly over the biscuit base, then cover the tin with cling film and refrigerate for at least 4hrs or overnight until set. While the cheesecake chills, make the pecan topping.

Steps 1 - 2 - In a small saucepan on a low-medium heat, stir the butter and sugar continuously until the sugar has completely dissolved and bubbled for 5mins.

Step 3 - Whisk in the cream until lightly bubbling, then add the salt, vanilla, cinnamon and toasted pecans*, stirring until the pecans are fully coated.

Step 4 - Remove from the heat, and allow to cool to room temperature in a heatproof bowl for at least 45mins or until the cheesecake has fully set.

Step 5 - 7 - Remove the set cheesecake from the tin, by running a knife or spatula around the edge, setting it on a cup and unclipping the tin before pulling the tin sides down.

Step 8 - Spoon the cooled pecan mix over the top before serving.

It’s best to store your pecan pumpkin cheesecake in an airtight container. Alternatively, you can keep it in the springform tin and cover it with plastic wrap. It should keep for up to 4 days stored in the fridge.

If you want to freeze your cheesecake, you can wrap it in two layers of plastic wrap / cling film and then a layer of aluminium foil and freeze. It should last up to 3 months frozen. Defrost in the fridge and enjoy!

How long does homemade cheesecake last?

Your no-bake cheesecake should last for up 4 days stored in an airtight container in the fridge.

Can you freeze pumpkin pecan cheesecake?

Yes! You can freeze your cheesecake wrapped in two layers of cling film and a layer of foil for up to 3 months. Defrost in the fridge and enjoy!

How do you make a no-bake cheesecake set firmer?

This is a soft set cheesecake, but if you like your cheesecakes firm, you can add gelatine to the filling mixture.

Sprinkle 1 teaspoon powdered gelatine over 2 tablespoon boiling water in a heatproof bowl. Whisk until the gelatine has dissolved and set aside to cool. Once cooled, beat this into your pumpkin spice cheesecake filling before you fold in the whipped cream.

Alternatively, you can stick your cheesecake in the freezer!

How do you toast pecans?

How do you make pumpkin spice mix?

Why not take your pecan topping to the next level, and add a little bourbon / whiskey to the mix? Add 2-3 tbsp bourbon to your finished topping before allowing it cool. This boozy version is the perfect dessert for your next special occasion!

Or why not stir in some maple syrup for a sweet twist? Add 2 tbsp maple syrup to your finished pecan topping before allowing it to cool.

For a stronger pecan flavour, you can add 1-2 tablespoon toasted pecans to the food processor along with the ginger cookies to get whizzed up into the base layer. The perfect ginger pecan crust!

The rest of the recipe should be gluten-free, but always check your ingredient labels just in case. Some brands could have cross-contamination.

For all the cheesecake lovers, check out these tasty recipes:

If nutty treats are some of your favourite desserts then check out these best pecan dessert ideas, including these tasty pecan treats: 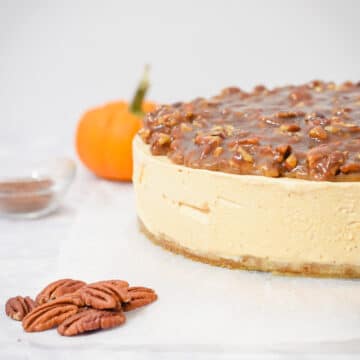 * If needed, strain any excess liquid from the cream cheese and/or pumpkin puree using a muslin cloth / cheesecloth. This is mainly for those using the softer cheeses found in some countries, e.g. UK. Use 500g cream cheese instead to account for the water lost.   ** You can make your own pumpkin spice mix by combining the following:   *** If your pecans are raw, toast them in the oven on a lined baking tray for 5-7mins in an oven pre-heated to 180°C / 160°C (fan) / Gas Mark 4 / 350°F. Allow to cool and either chop into pieces or keep whole for use in this recipe.