This is my best ever vanilla American buttercream frosting. It has a beautiful fluffy consistency and it’s super quick and easy to make, using only basic ingredients.

Not only is the consistency great, but this classic frosting has the perfect vanilla flavor to pair with all of your sweet treats! It goes great onto birthday cakes as well as cupcakes, cake pops, cookies, macarons and brownies.

🧁 What is American buttercream?

American buttercream is a classic frosting made of beaten butter and powdered sugar. Typically, cream or milk and flavourings, such as vanilla extract or cocoa powder, are also added.

This frosting is known to be quite sweet and is easy to make. It’s often used to decorate cupcakes and cakes.

Other types of buttercream

Typically, most home bakers prefer American buttercream, also called classic buttercream, as it is the easiest type to make. It uses very few ingredients and there’s no need to cook any parts of it, making it really quick and easy to make.

A lot of professional bakers prefer Swiss meringue or Italian meringue buttercreams, however, as they tend to be less sweet, more stable and silky smooth compared to American buttercream.

This vanilla buttercream is perfect for so many sweet treats and can be adapted to suit your needs. You can change the flavours really easily and it’s such a quick recipe it’s great for a last-minute bake.

This is my favorite buttercream recipe as it uses only simple ingredients and makes a lovely fluffy frosting. The great thing about it is that it’s not a grainy frosting and you can get so many flavours from one basic frosting.

How long does homemade frosting last?

Your homemade frosting should last up to 3 days at room temperature or a few weeks in the fridge stored in an airtight container.

It’s best to store your American buttercream in an airtight container in the fridge. You may need to bring it back up to room temperature and re-beat it before using it or it could be too firm to pipe or spread easily.

It’s good to note that if you use slightly older buttercream, your cake / cupcakes may not last as long as usual.

Can you freeze buttercream?

Your buttercream frosting can be frozen in an airtight container for up to 2 months. Defrost, re-beat and use as normal per recipe.

For a light and creamy American buttercream frosting, start by beating your room temperature butter until it’s pale and fluffy. It could just be me, but this always seems to take longer than I think. It should be several minutes of beating the butter if using a stand/electric mixer. This will go a long way in giving you creamy and light frosting.

When you sieve in your powdered sugar, to avoid a big cloud of sugar dusting the air, give your mix a little stir with a spatula or wooden spoon first to slightly mix the icing sugar into the butter. Then you can turn on your stand mixer or electric mixer without breathing in sugar clouds!

When using your buttercream, be sure the sweet treat that you’re frosting is completed cooled first. Otherwise, your homemade frosting will melt straight off it!

Buttercream can be tricky sometimes, and it can split if you over-beat your frosting or if the temperature is too hot or too cold. For example, don’t add cold milk straight from the fridge to your buttercream!

It can be hard to rescue broken buttercream, but generally if it’s turned stiff and curdled, then it’s probably broken because the butter was too cold. Pop your frosting in a warm water bath or double boiler (bain marie) set up, gently warming until it starts to loosen up. Stir gently until your buttercream comes back to together in a smooth mix.

If your frosting becomes thin and soupy as you mix it, then your butter may have been too warm when you started. You can try refrigerating your buttercream in the bowl for 10-20mins before re-beating it.

How to lessen the sweetness of buttercream frosting

If you don’t like your buttercream too sweet, you can add salt to cut some of the sweetness. Add it in a pinch at a time, giving it a taste test, so you don’t risk overdoing it.

Alternatively, you can also reduce the amount of powdered sugar you put in, but only by a few tablespoon worth or you’ll affect the consistency.

How to thicken homemade frosting

For a thicker homemade frosting, you can add more butter to your buttercream. This is what gives your frosting it’s structure.

You can also put your buttercream in the fridge for 30mins firm it up more before use.

How to thin frosting

To thin your buttercream frosting, you can add more cream or milk. Stir in only an extra ½ tablespoon at a time to avoid adding too much and making your frosting too thin.

You can also warm your frosting slightly, for example if it’s been kept in the fridge you can try bringing it up to room temperature for roughly 30mins to help thin the frosting.

In general, most frostings are gluten-free, as they are made of fat (such as butter or shortening) and powdered sugar, but this will depend on the flavours added.

This recipe makes a gluten-free American buttercream frosting, but please check your ingredients for cross-contamination just in case. It's probably obvious, but make sure whatever you're frosting with this buttercream is gluten-free too!

If you’ve got any specific questions on making the best ever vanilla American buttercream frosting, please feel free to leave a comment below and I’ll try my best to help out!

You can use this basic vanilla buttercream recipe to frost your cupcakes or cakes. This recipe makes enough to frost 10 cupcakes (regular size). I love using this buttercream in making easy funfetti vanilla cupcakes perfect for birthday parties!

I also love making frosted blondies or brownies, simply spread a thick layer across your cooled traybake before cutting it into slices. You’d probably only need half the amount of this frosting recipe for an 8-inch square sized traybake.

For something a bit different, you can use this frosting between two cookies to make filled sandwich cookies. This would be a delicious vanilla filling for melting moments butter cookies or between two of my favourite vegan biscoff cookies.

You can frost your baked goods with this homemade buttercream by simply spreading the frosting with an offset spatula or knife.

Alternatively, you can pipe your buttercream using a piping bag and piping nozzle of your choice. When I frost cakes and cupcakes, I usually use the nozzles from this large piping tips set.

You can colour your American buttercream using food colouring. I usually recommend using a gel or paste food dye, as it doesn’t add too much liquid to your buttercream and so won’t affect its consistency.

Add your food colouring a drop at a time, and leave your buttercream for a few minutes to allow your colour to develop and strengthen once you’ve stirred it in. If it’s not the right colour after this, you can then add another few drops as needed.

If you beat your butter for long enough before adding your icing sugar, your buttercream should be a very pale yellow. However, if you want very white frosting, you can add some white food colouring to your buttercream to help remove the yellow tint.

This American buttercream frosting is great as a simple vanilla flavor. But you can also add different ingredients to change the flavor.

If you add 1 ½ tablespoon of cocoa powder, you’ll get a delicious chocolate buttercream, like the one I use for these gluten-free chocolate cupcakes.

You can also swap the vanilla extract for lemon extract, orange extract or almond extract for example. Or for a more natural flavouring, you can add a few teaspoons of lemon juice or other fruit juices instead of using a flavor extract.

To make vegan buttercream frosting, you can swap the butter for a firm dairy-free butter (baking block) alternative. You must use the solid kind rather than a liquid or soft variety.

You can also swap the milk for a dairy-free alternative, such as soy milk, almond milk or coconut milk.

If you’re baking for vegans, be sure to then use your vegan frosting on a vegan cupcake, cake or cookie!

So, I definitely recommend that you whip up a batch of this easy vanilla American buttercream frosting! But as an avid home baker, I’m sure you’re asking yourself “what next?”.

If you’re looking for some sweet treats to use this classic frosting on, check out my recipe for matcha cupcakes or these chocolate orange cupcakes or why not frost these triple chocolate brownies or melting moment sandwich cookies with sweet vanilla goodness?

If you love all things vanilla heaven, why not take a look at my easy recipes for Victoria sponge cake or these funfetti cupcakes.

For other frosting and buttercream recipes, check out my favourite matcha buttercream or how about a white chocolate no-cream ganache. 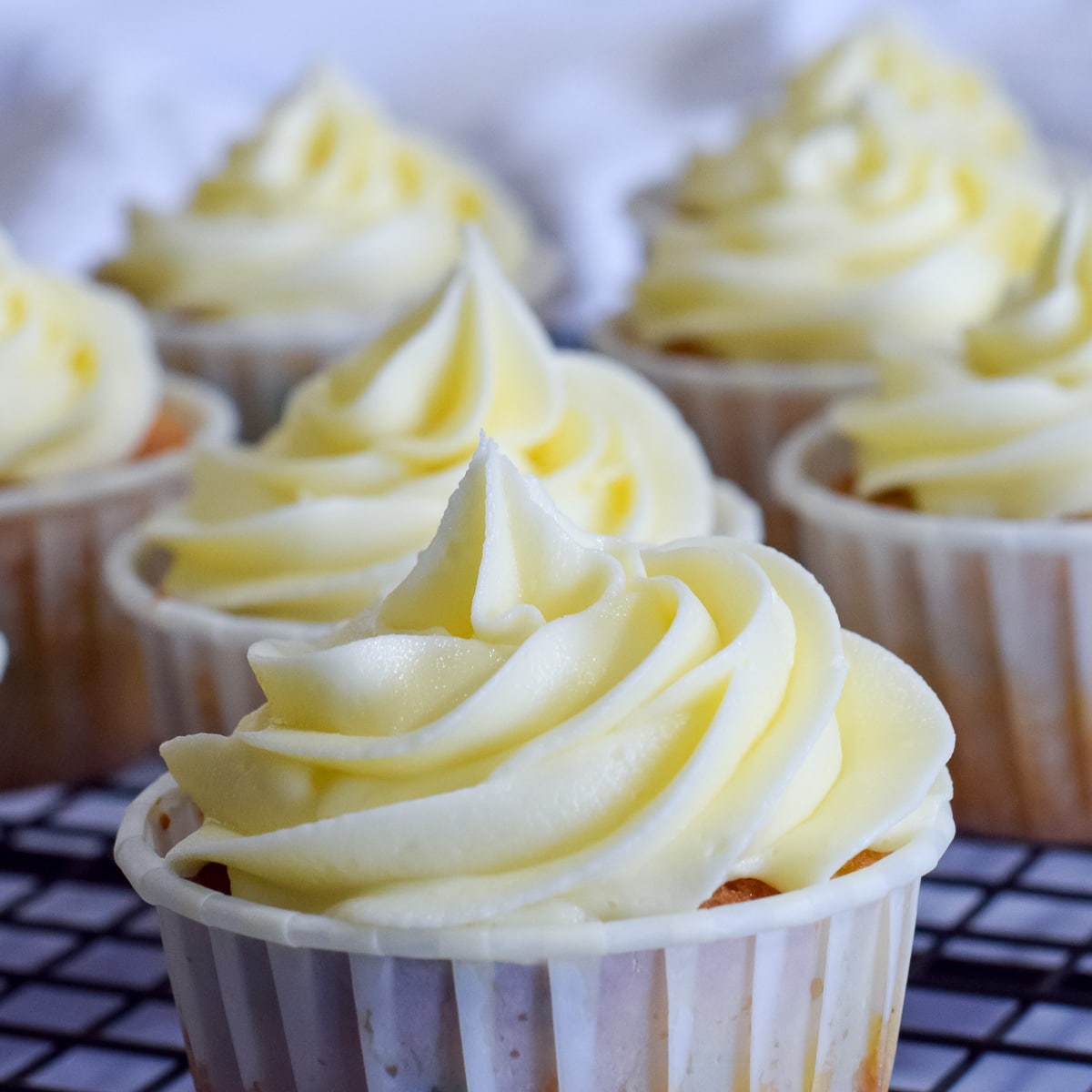